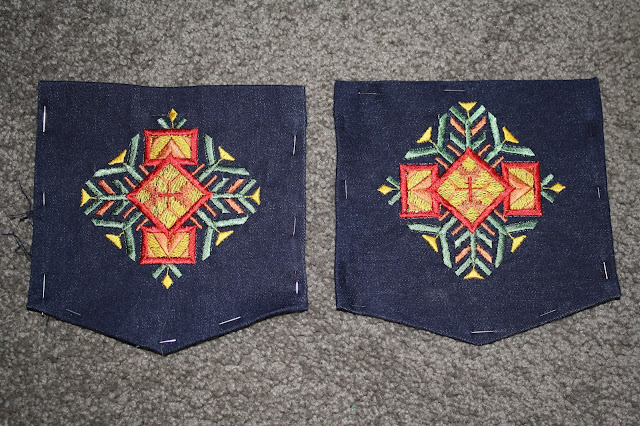 I have been trying to make my first ever pair of jeans. When Style Arc sent an email advertising a pattern/ stretch denim package  for jeans I immediately bought it which is another first and I don`t know why . The mysteries of advertising which tap into the human psyche .
One advantage of making my own jeans was to be able to customise the back pockets .
My sewing machine has an embroidery function which I rarely utilise so a couple of weekends ago I set about relearning how to use this , looked through some folders of designs available to me ( which my late father created for my mother - what a man to spend hours doing this for her ! ) and practised some designs which I liked. I finally settled on one from a Pfaff Creative Card 300, design 27 .I even really liked their chosen colours. 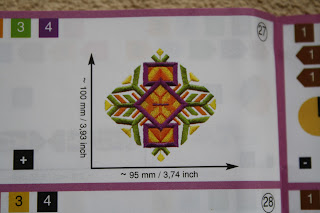 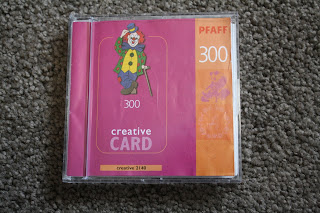 I practiced on some old serviettes and then went to work on the denim of which there was not much to spare. It all went really well.
Now I have discovered that I mainly make mistakes in two situations . One is when I am tired and it is later in the day and I just want to finish up a project. I relearnt this several times and now I just do not go there. Once I am tired or a  bit sick of sewing I just stop even if I am really close to completing something.
The other time  is when I am really excited about a project so I just tend to leap in . I don`t think there is much I can do about this.
So I was in the process of sewing up the pockets and noticed that one pocket was slightly larger than the other . Then I realised what I had done. I cut the pocket out the wrong way so the stretch is going vertically , the pocket size is out and the design is going the opposite way. And here I thought I was so clever by making a see through plastic pocket template so I could centre the design properly ! 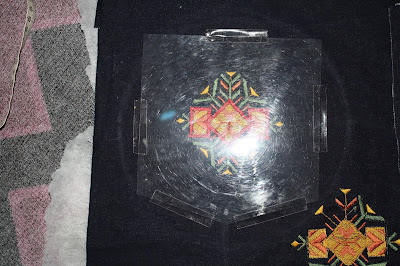 I was seriously thinking about just making this a design feature but even though I am a bit of a slapdash sewist - a wrinkle here or there  doesn`t bother me- I knew the magic closet would not work with this one .
So last weekend I set up the embroidery function again and redid another embroidery. 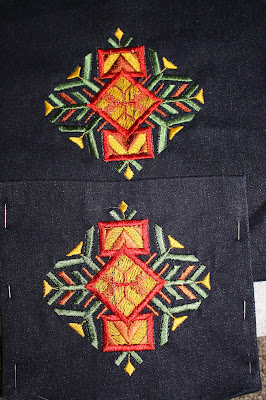 Well everything was going really well until I got to the orange colour . Is it my imagination but does that look a bit different to the original ? Sob, no my glasses did not need cleaning , I had picked out the wrong colour. Sigh. So I worked out the correct orange embroidery thread and off we went again. ( very hard to tell in the above photo but the orange colours are different - one is more a bronze ) . 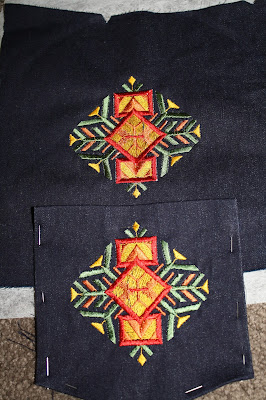 Success ! Finally . ( This saga does not even include the one where the embroidery thread broke and I realised too late ) . Now initially I told myself I was a sewing eejit but does that make me feel better about myself ? No. Does it get the embroidery done ? No . Now I am telling myself that it was all good practice and the wrong colour confirmed I liked my initial choice and I am much quicker at setting up the embroidery part of my Pfaff now . I am still frustrated at the waste of time but I am not putting myself down.
This leads me to sewing successes and how we perceive them. I recently read an excellent post by Diary of a  Sewing Fanatic asking whether we compare ourselves to others in term of how much sewing we get done. A lot of people admitted they did. I have  not  been a joiner inner on sew alongs etc. I joined in MMM and a fabric fast last year . I have always been on the fringe of things all my life and being part of the sewing internet community is one of them. But this is also why I think I am successful. My blog is so small but I have not given up. If I judged my success by the number of followers and comments then I would have quit years ago. I have read people complain about this but IMO this is not a reason to blog. I blog and sew for myself. I have never sewn the trendy indie patterns or the latest fabrics or sewn couture or been artistic  but I wear my home sewn clothes almost every day and keep them for years and years so this is a success. It does seem so obvious to say this but comparing yourself to others does not lead to contentment . Besides we only ever show the best / happiest side of ourselves on the internet. 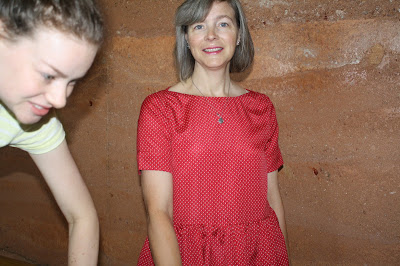 One last photo - an outtake for my latest sewing project yet  to be blogged . A sewing mistake and success all rolled into one ! .I was using the self timer and my daughter was trying to get past .
Well hopefully anyone in the sewing doldrums can read this post and feel better about themselves. 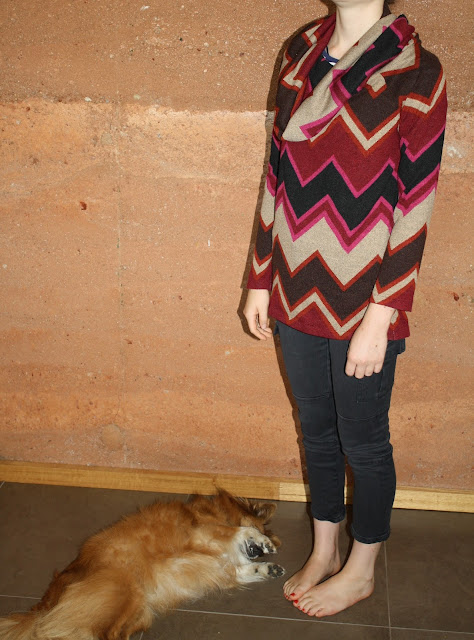 Blogging activity in no way reflects my sewing activities. I have made a couple of beige camisoles and acacias . I can see one of the advantages of sewing indie patterns is being able to write I made some acacias rather than I sewed some Kwik Sew 2100s but it boils down to  that I made some beige  underthingies and they are extremely basic and necessary and much better than shop bought especially in terms of comfort but totally boring and private so no way I will blog those. 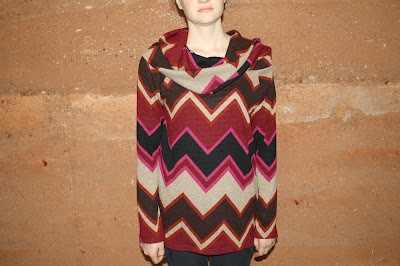 Much more blog worthy are the raglan pullovers I sewed. I completed these last month but only just convinced my youngest to model for me ( it has been disgustingly humid and hot ) on the proviso they were headless photos ( morning , just got up , getting ready for work etc ) . 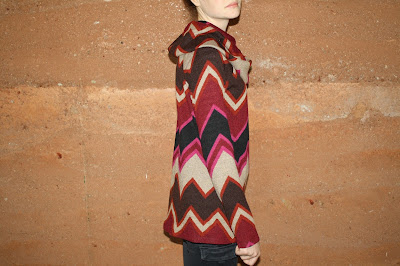 The pattern is from August 2017 , a raglan sleeve pullover with a ginormous collar . The fabric is a cosy , soft chevron thick knit from Darn Cheap`s $2/metre table.  I know this is seasonally inappropriate but I really wanted to get my daughter`s sewing out of the way so I could then be totally selfish and just sew for me. Also she is about to leave home for uni ! Happy and sad at the same time . This was a very easy project except for the pattern matching. Does anyone know is it even possible to match the raglan sleeves and the chevrons ? I think the answer should be don`t worry, who cares , life is too short but pattern matching is the holy grail for home sewers - one of the things that we do better than bought. Well  all I can say is that I tried my best. 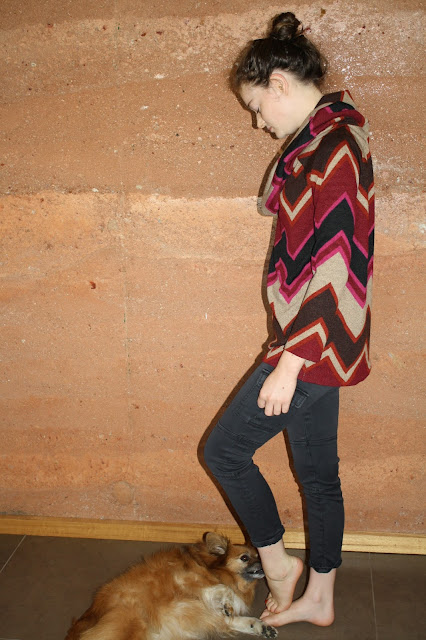 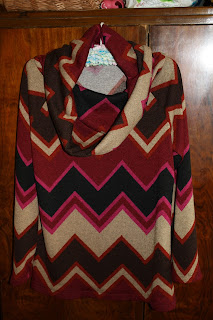 I know this last shot is not headless as promised so please don`t look at her head but focus on the fluffy thing on the floor that is about to approach  her foot for a good tickly licking session.
Well now I have my selfless sewing out of the way ( three tops , one dress , one pullover in the last couple of months for my DDs ) the natural progession was to sew a raglan pullover for moi ! 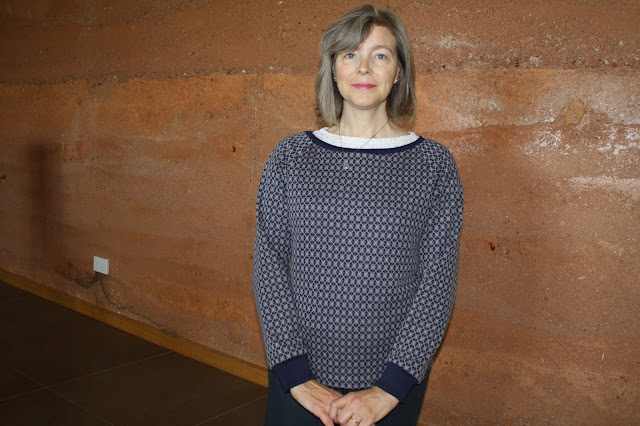 I used McCalls 6992 which was an entirely unnecessary pattern purchase  since  I already have an old Kwik Sew Raglan pattern and a saddle shoulder version in a Knipmode magazine but influenced by seeing so many fabulous versions out in sewing blog world . I used a navy and grey argyle knit from Clear It bought late last year. 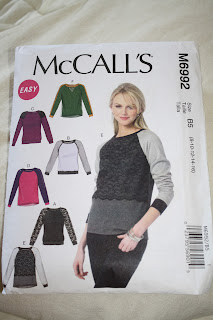 This was another easy project BUT my neckline looks so much wider than others I`ve seen  and that annoys me because I used new , bought in a proper shop fabric rather than my usual op shop or gifted stuff . Perhaps I accidently stretched out the neckline applying my ( very old ) stashed ribbing ? Last time I sewed myself something with proper shop bought fabric that was also a dud so I am starting to get paranoid here. Well this pullover is not a complete dud  and I have worn it a few times .I will give  the pattern another try but will find some cheap opshop windcheater material next time. 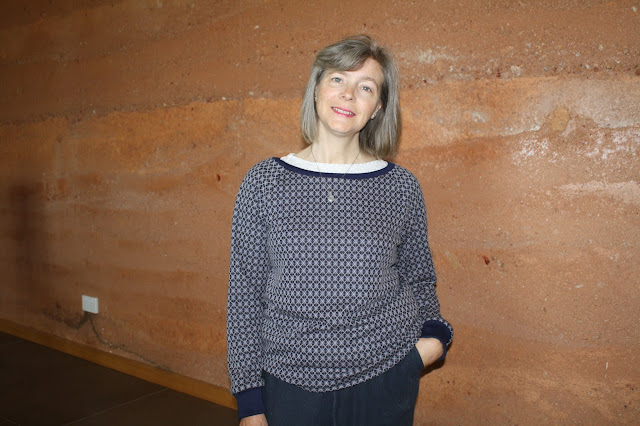 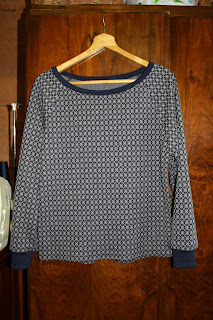 Well so seriously sewing gurus could I have matched my stripey chevrons at the raglan Sleeves ?
And did you know that raglan sleeves were named after Lord Raglan (1788- 1855 ) a British commander in the Crimean War? No neither did I until just now.
Posted by Janine at 19:51 9 comments: